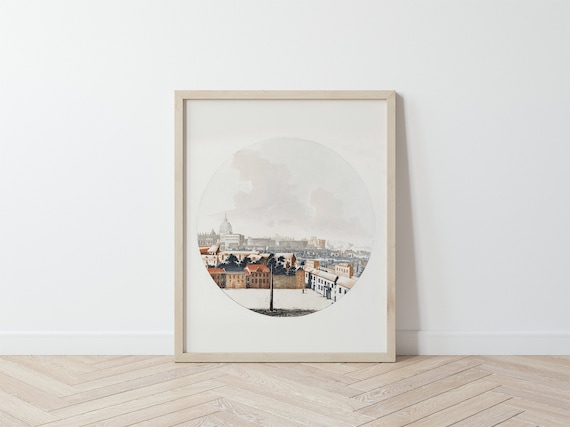 ☽ you'll get
This reproduction print is of the highest possible quality and printed on lustre Kodak Endura professional-grade paper, the best paper in the industry. Once the print is complete, we run it through a unique finishing process to emboss the texture directly onto the photo paper, giving it a subtle canvas look.

☽ about the art
View of Rome by Johan Teyler

Teyler was born at Nijmegen. His father was William Taylor, a British or Scottish mercenary, who changed his name to Teyler. Johan studied Latin at the Latin school of Nijmegen and Mathematics at the Kwartierlijke Academie, where he wrote a dissertation in favor of Descartes.

Later the same year he was dismissed and returned to Nijmegen to receive backpay which was still owed him there. With the extra funds he undertook a trip to Italy, Egypt, the Holy Land and Malta, and later sent his diary to the Elector. He later wrote a popular book on fortifications in 1688 called Architectura militaris, and in the same year received a patent on a color printing process that involved using colored ink instead of just black ink when printing plates. In 1695 he had a printing workshop in Rijswijk where he printed military-related works, but in 1697 he sold it and in 1698 undertook another trip to Berlin.

☽ you frame it
No frame included. Shop frames here: https://tinyurl.com/vz762ht or your local thrift shop.

Thank you for shopping Ruby Dahlia!

The term 'Etsy' is a trademark of Etsy, Inc. This application uses the Etsy API but is not endorsed or certified by Etsy, Inc.

Are you a party professional?
Create your free vendor listing!