Nicole W told me about her Magical Cornish Fairy Affair months ago, when she was still in the planning stage. I knew this was going to be an out-of-this-world party, so I asked her if I could write a SPOTLIGHT feature on it once she had had it.

How right I was about her party. It's incredible! Take a look at these photos, and the most amazing part is that Nicole did it all herself (including the cake)! 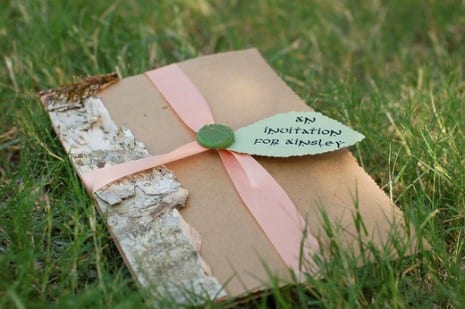 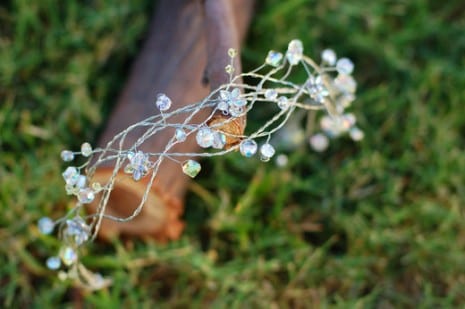 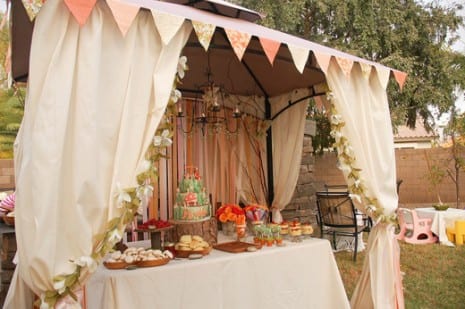 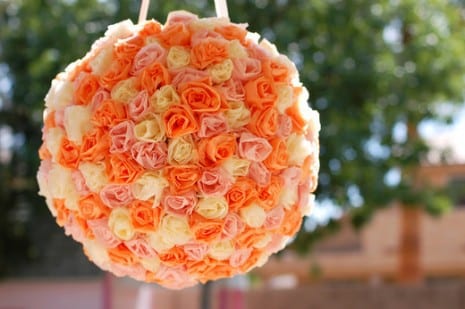 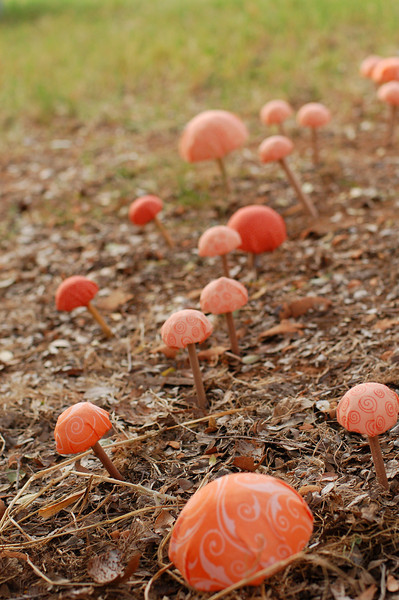 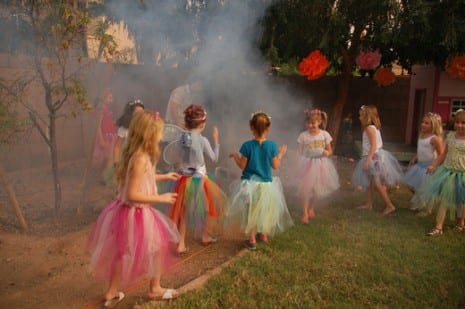 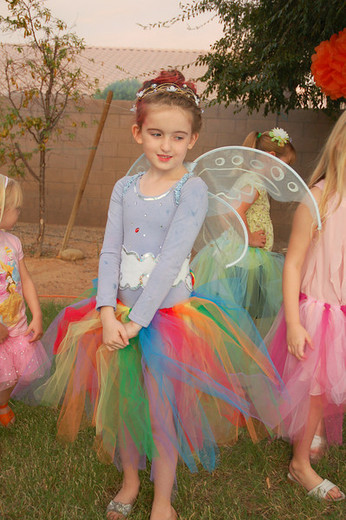 I asked Nicole to share how she put it all together, and here's what she said...

Who was the party for and how did you come up with your theme?

The party was for my daughter's 7th birthday.  She originally requested a fairy party, and while I was happy to oblige, I wanted to put my own spin on it.

There are a lot of gorgeous fairy parties out there.  So I brainstormed with my daughter about it, actually.  It was a collaboration.  Our family came from Cornwall (before emigrating to the UP of Michigan in the late 1800s), we'd taken a summer trip there, and my husband and daughter have been learning Cornish (an essentially dead Celtic language so that they have a "secret" language together--yes, we're geeks).

So it wasn't long before using the mythology and fairy folklore of Cornwall as a specific inspiration came around.  Stone circles.  Piskies, spriggans, and browneys.  Cornish pasties.  There was so much from which to draw!

For the color palette, I adore the green/cream/red parties out there.  I've always loved that combo.  Those little toadstools get me every time.  But I wanted something a little bit different.  The birthday is in October, so I decided to tweak the classic palette and go with greens/browns/creams (the natural colors) and pops of soft oranges.   This was largely influenced by the fact that I scored over a thousand yards of ribbon for only $4 on clearance at my local ribbon and lace store.  Eight massive spools of ribbon in a gorgeous color scheme for mere pennies?  I'll take that as a sign! 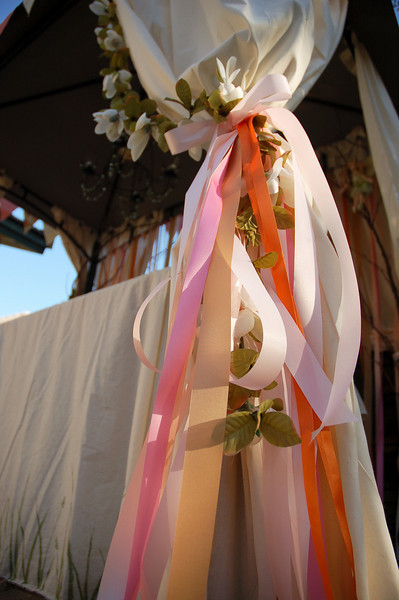 How long did it take to plan?

I spent six weeks working on the party.  I probably would have been happy to spend longer (and some of those wishful items on the to-do list would have gotten done!) but that was as quickly as I was able to nail my daughter down to one theme.  She's getting better.  For her fourth birthday, she insisted on a Madeline-Dora-the-Explorer-Pirate-Princess-Pink theme.  Now that's a hard cake to make.

What was your overall budget?

Eek.  I have no clue.  I really should have had a budget in mind from the outset, but I didn't.  I am, however, a huge do-it-yourselfer.  I made, as a conservative estimate, approximately four thousand trips to Michaels, Joann Fabrics, and Lowes for this party, and basically bought everything on sale or with a coupon.  I took advantage of clearance sections.  I improvised and recycled.  The biggest splurges were the stone circle (it cost about $90 to make, but had such a huge impact!) and having the pasties catered by our favorite local restaurant, the Cornish Pasty Co.  (http://www.cornishpastyco.com/).  Still, food for 40, half of whom were adults, for $117?  Not bad!

Did anyone help you put it together?

It was essentially all me.  Photographer = Me.  Baker = Me.  Decorator = Me.  Party Coordinator = Me.  But I certainly couldn't have done it without the help of my husband, who indulged me during my many hours of crafting, and took a day off work so he could watch the girls while I was carving Styrofoam in the garage.

My mother flew in for the birthday (not that she needs an excuse to see her granddaughters!) and was heroic the day before the party, making more Italian Meringue Buttercream and re-crumb-coating the cake after I had a fondant tearing emergency (*&^%%$# Wilton.  My homemade performed better and tasted better after all that grief.  hmph.)

And my friend Jill came over an hour before the party and helped out with all those last minute details putting everything together so I could take pictures before the guests arrived.  Even though this was pretty much a solo show, there's no way I could actually have done it all myself.

What was the most fun part of planning it?

An excuse to indulge in fairy fun!  The sheer, excessive, girliness!  A fun excuse to invent all sorts of new crafts!  And getting to pretend that this is all about my daughter, not about how much fun I'm having!  ;-)  Who are we kidding.  Sure, I'm glad she adored the event, but I wouldn't have done it if I hadn't had so much fun putting it all together.  I'm already planning her next party, and I hope she sticks with the theme, because I have such GREAT ideas already!

What was the most difficult part of planning it?

Simply finding the time.  I have a one year old daughter as well, and it's nearly impossible to get anything done while she's awake.  It'll get easier in years to come, but for right now, it was a real challenge to do anything with the Tiny Dictator around.

What DIY elements did you do?

What was your favorite DIY element?

It's hard to choose, but I was very proud of my idea for twinkling, glowing punch.  It worked out so well, and was so affordable and easy!

What food and beverages did you serve?

We served the above-mentioned desserts, but also had salad (with homemade dressing), apples, and a selection of Cornish pasties (PB&J, Cheese and Onion, Chicken Greek, and the traditional Oggie) from the Cornish Pasty Co.  That was a vendor I used.  It's one of our very favorite restaurants, in Mesa, AZ.   They'll even allow you to buy the par-baked pasties and bake them at home!  I might not have made the pasties, but I did build the wood-fired oven we baked the pasties in!

I made a pinkish orange punch (just threw together pink lemonade, peach-white grape juice, and sprite) that was a hit with the kids, served "morning dew" (ice water), and had three adult beverages, too (mojitos, sangria, and Penzance Punch, made from a recipe of a punch I was served by a pirate in Penzance during the Golowan cultural festival this past June!).

What, if any, activities did you have?

We had face painting, wing-decorating, the pinata, and a magnificent treasure hunt put together by my husband. (He may be a computer engineer now, but he was an English and Latin major in college, and knows his poetry!  The rest of the time was unstructured play time.  One of the main games the kids decided to play was reenacting the story I'd written for the book/invitation!  (Full text of the story here  http://tradewindtiaras.blogspot.com/p/fairy-party-invitation-story-text.html)  I decided not to structure more games because it's always hard to get the kids to stop playing long enough to get them to play an organized game.  Why fight it?  Just let them go have fun.

What was your favorite moment during the party?

My husband playing the part of the evil Spriggan (a very mischievous type of Cornish fairy whose job it is to protect treasure), leaping out and trying to "protect" the treasure at the end of the treasure hunt.  Such squeals of mock fear and delight I've never heard!  The girls loved fighting him off with their wands. 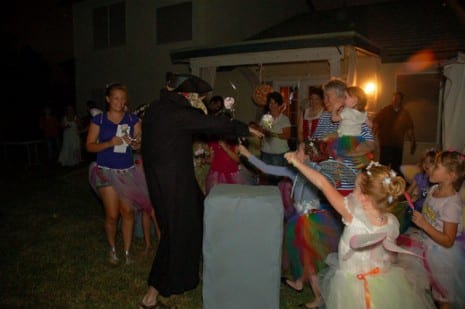 Any lessons learned from planning the party (things you might do the same or differently next time)?

Start setting up earlier!  I thought I'd learned this lesson with previous parties, but I guess I didn't learn it well enough!  I want time to photograph all the elements I spent so much effort creating, and I always end up rushing.

Any final thoughts about the party?

I'd do it again, a thousand times over.  I show love by putting tremendous efforts into things.  Elaborate cakes.  Insanely complicated parties.  Involved crafts.   As I was putting together the pinata one evening, my daughter said, "You must really love me!"  Yes!  Mission accomplished.  I LOVE this kid, and I want to shout it from the rooftops in my quiet, crafty way.

Nicole, thank you for sharing with us all about your beautiful party!  What a wonderful job you did!

Check out Nicole's other gorgeous parties on our site, and if you want to learn more about her fabulous desserts, please read my feature on her tea set cupcakes.  Also, to  see the beautiful wedding tiaras Nicole creates in her spare time when she's not putting together lavish parties, please check out her blog, Tradewind Tiaras.