I was just talking to Christine Long-Plotkin, who recently added her wedding photos to our site.  She got married in November 2009 in Los Angeles, and threw a $30k wedding on a budget of $13k. 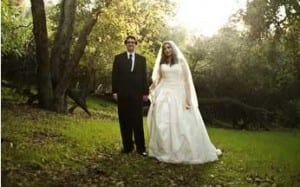 Christine and Jacob under the big trees in Topanga Canyon

How did she do it?  With a "can do" spirit, by finding people who were willing to work within her budget, and by enlisting everyone she knew.

First, she found an outdoor restaurant in a magnificent setting called Inn of the Seventh Ray, that was flexible on cost. They have no alcohol license, so it was beer, wine, and champagne for everyone.  Plus, they bake their own wedding cakes so there were no cake cutting fees.

She hired a cute, bubbly, actress friend of her sister's to be the MC and DJ, gave her a laptop with prerecorded songs, a script, and let her do her thing.

She used officiant, Matthew Linzmeier, who was a friend of the family's.

Her mother took a flower arranging class and became the florist.

She found a college kid named Andrew Lee, studying photography and used him as her photographer.

She called in a favor with a graphic artist friend of DKNG who designs band posters, and had him design their invitations in the form of posters. 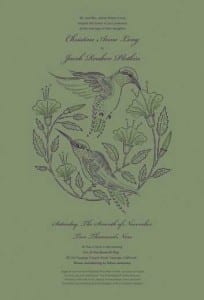 Their invitation designed by a graphic artist who does band posters

Her husband's mother made the cake topper.

And since Disneyland is a special place to both Christine and Jacob, Christine blew up vintage Disneyland posters, had them printed at Shutterfly, and used them as table themes.

Christine said it wasn't the fanciest wedding, but that wasn't what they were after.  They wanted something beautiful, meaningful, and personal.  And that's what they got.

Her one splurge... her $3,000 dress because who doesn't want to look like a princess on her wedding day?