I love Bar and Bat Mitzvahs.  I love them because they're like weddings, only a lot of times, more festive.  You can go over the top with a Bar or Bat Mitzvah and nobody cares because it's a party for a 13-year-old!

So to get some insight into what's hip and cool right now in the world of Bar and Bat Mitzvahs, I talked to two event planners -- Terri Bergman on the east coast and Carol Rosen on the west coast -- who plan a lot of them.

Terri of Terri Bergman Events, based in Washington DC, says she likes to think of Bar and Bat Mitzvahs in terms of two party areas within one room -- one area for the adults and one for the kids.

The adult area is usually more traditional with a seated meal at tables, but for the kids party, she likes to keep it casual.  She create lounges, renting furniture to make the party feel more like a club than an event. 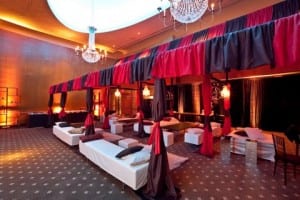 A Bat Mitzvah lounge for the kids designed by Terri 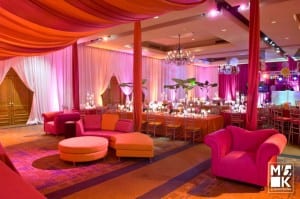 Another one of Terri's lounges 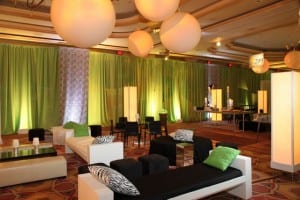 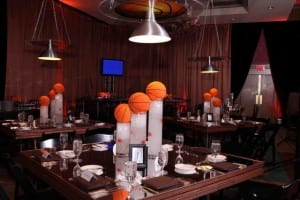 Basketball centerpieces at a Bar Mitzvah designed by Terri 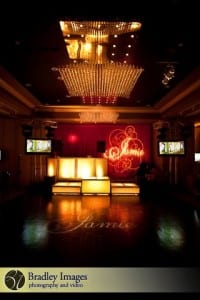 Lighting and video screens at one of Terri's Bat Mitzvahs

And to keep the kids (and the adults) entertained, she likes to have activities going on during the party.  Some of her favorites are:  a casino table, a cell phone bling station, a temporary tattoo or airbrush artist, Guitar Hero, flip books (which I wrote about here), or Dance Heads.  According to Terri, people love personalized activities and they love having pictures or videos of themselves to take home.

When I talked to Carol Rosen of Party Designs by Carol, based in Los Angeles, she said she also likes to do lounges for the kids and sit down dinners for the adults.  She's a big fan of casual kids buffets, food stations, and candy tables. 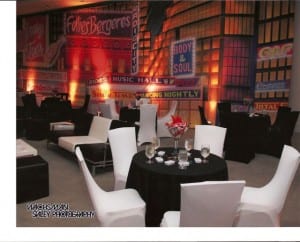 A kids' lounge at one of Carol's Bar Mitzvahs 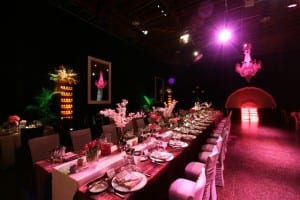 A dramatic table at a Bat Mitzvah designed by Carol 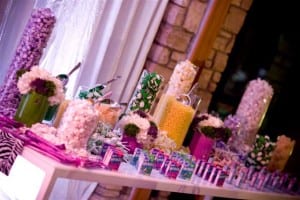 A candy table at one of Carol's Bat Mitzvahs 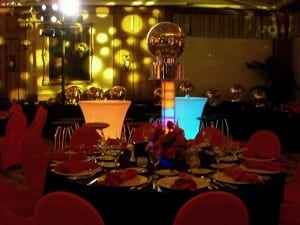 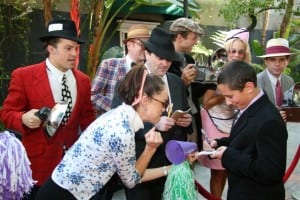 A "red carpet" set up outside one of Carol's Bar Mitzvahs

For activities, she likes setting up a karaoke station or a Rock Band video game station.  She also likes airbrushing, temporary tattoos, and Dance Heads.   But another way Carol likes to get the party started is by hiring DJs that provide trained dancers or "party motivators."  These dancers get to know the kids during the cocktail hour, then keep them dancing and having a good time throughout the night.

In terms of party favors, here's where we get an east coast/west coast split.

They are a big thing on the east coast.  Some of Terri's favorite ideas are personalized sweatshirts, tank tops, boxers, fleece scarves, or beach towels.

On the West coast, favors are not as common.  Carol like to have cards on the table that say a donation has been made in the guests' honor or she likes edible takeaways like a bag of bagels and cream cheese for each guest.

Please know, the parties I'm writing about are the big ones -- we're talking $50k and up.   Most of us can't afford them, and according to Terri and Carol, budgets, even in this stratosphere, are coming down.

So use these ideas and photos as inspiration, but don't be afraid to talk to an event planner if you are having a much smaller Bar or Bat Mitzvah, because believe it or not, with their connections and know how, they can actually save you money.  That's right... save you money.

And if you don't believe me, call Terri (on the east coast) and Carol (on the west coast) and ask them yourself.  They'll be happy to talk to you.